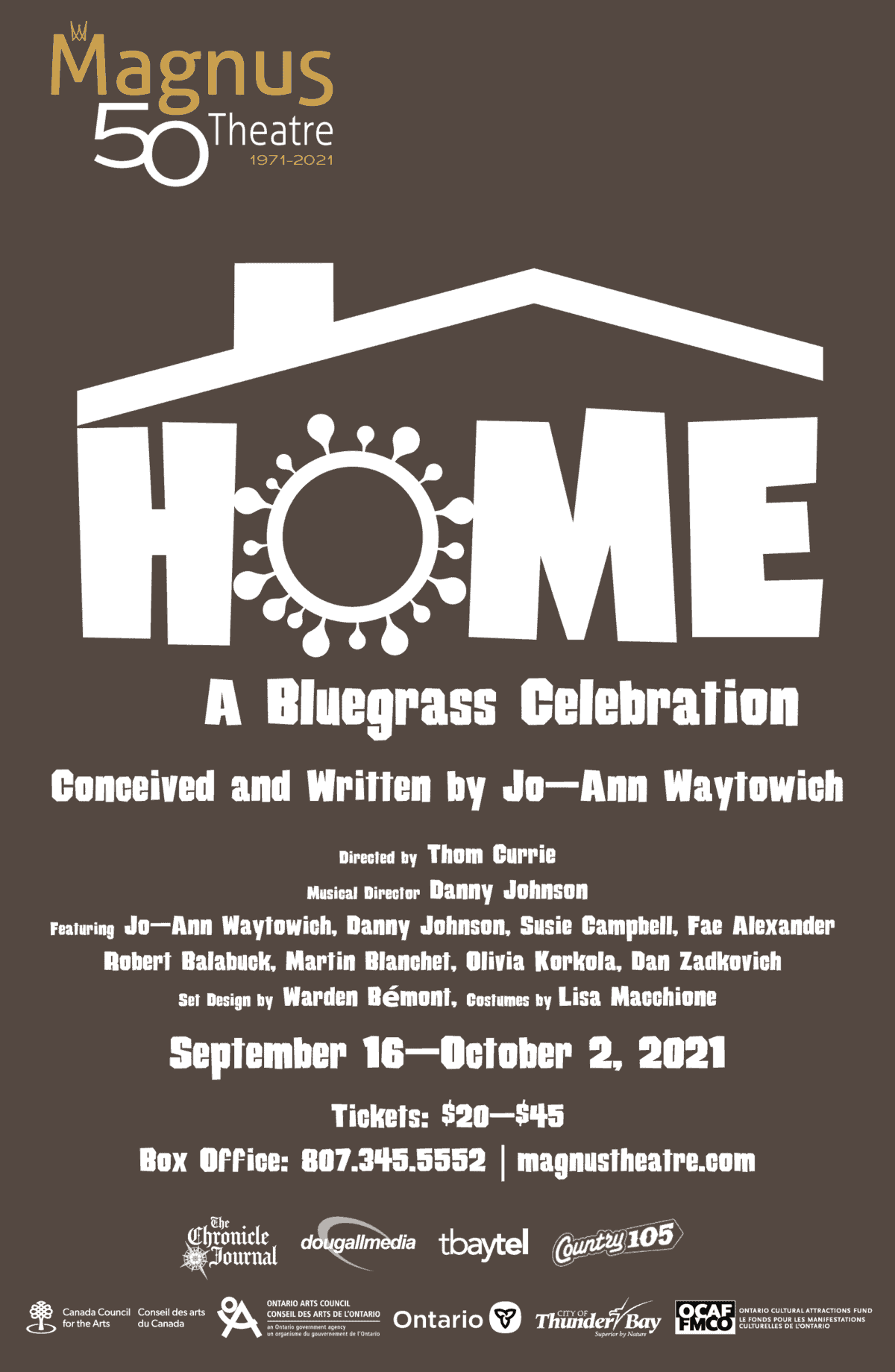 HOME: A BLUEGRASS CELEBRATION opened on September 16th to kick off the theatre’s 50th anniversary season. The original music revue was conceived and written by legendary Thunder Bay playwright and actor Jo-Ann Waytowich, well known to audiences far and wide for her iconic Ivanka character.

The inspiration for the latest show came during the pandemic lockdowns, when Waytowich was sequestered to her home and embraced her creative outlet to pass the time meaningfully. The result was an original show that featured bluegrass music for a funny and relatable look at the year in isolation from the point of view of three women at different stages of life. Directed by Magnus Theatre artistic director Thom Currie, with musical direction by celebrated local musician Danny Johnson, the production featured an ensemble of local actors and musicians.

The cast is made up of Jo-Ann Waytowich, Danny Johnson, Susie Campbell, and Fae Alexander and is accompanied by a four-piece band including Robert Balabuck on banjo, Martin Blanchet on bass, Olivia Korkola on fiddle, and Dan Zadkovich on mandolin.

Jo-Ann Waytowich has appeared in over a dozen Magnus Theatre productions spanning over two decades, most recently in 2019 for IVANKA: PASTA, SALAMI AND A GUY NAMED PASQUALE.

Danny Johnson is likewise no stranger to theatre audiences, having performed in over 60 productions across the country and locally, including MILLION DOLLAR QUARTET, RING OF FIRE, 2 PIANOS 4 HANDS, BUDDY: THE BUDDY HOLLY STORY, and HANK WILLIAMS: THE SHOW HE NEVER GAVE. He is an acclaimed singer-songwriter who has opened for many famous acts, including Bob Dylan, The Tragically Hip, Colin James, and Johnny Cash and has performed with such artists as Bo Diddley, The Temptations, Bob Newhart, Paul Shaffer, and many more.

Both Susie Campbell and Fae Alexander are making their Magnus Theatre debuts. Born in Toronto, Campbell was raised in Thunder Bay’s Westfort neighbourhood and studied music and dance from an early age. She’s performed in several local venues throughout Thunder Bay and Northwestern Ontario and has toured the world over from Europe to Dubai. For the past decade, Susie has played the lead role of Agnetha Fältskog, the blonde beauty from ABBA fame, as a member of the Reno Nevada-based ABBA tribute band, Abbacadabra, who have been performing sold-out shows throughout North and South America and Europe, headlining on several cruise lines, Las Vegas casinos, and the world-famous Whisky A Go-Go on the Sunset Strip in Hollywood.

Alexander was born and raised in Thunder Bay and Rossport, Ontario and grew up doing community theatre before attending Sheridan College’s Honours Bachelor of Music program. She is a singer, actor, and musician/songwriter who most recently appeared in Theatre Sheridan’s production of the Canadian musical RIDE THE CYCLONE. She was recently hired as a first-time playwright for the Superior Theatre Festival’s Indie Stream, where she began work on ISOBEL GUNN, a musical on the first contracted working women in the fur trade.

Robert Balabuck is likewise making his first appearance in a Magnus Theatre production. The veteran musician and retired Lakehead University professor has been playing bluegrass banjo for 60 years – 54 of those with folk group Flipper Flanagan’s Flat Footed Four. He wrote two songs for the Nordic World Ski Championships in 1995 that appeared on the official event soundtrack: “Thunder Drive” and “My Hometown”. He has played with many bands through the years, including John Allen Cameron, Irish Rovers, Ricky Skaggs & Kentucky Thunder, and Lonesome River Band.

Martin Blanchet is a distinguished jazz musician and currently Principal Bass in the Thunder Bay Symphony Orchestra. Born in Quebec City, Blanchet’s musical talents have taken him to orchestras around world. He currently sings and arranges music for the Martin Blanchet Jazz Quintet and creates a variety of different shows including Café Paris, Sharp Ninth #9, Manouche, Mini-Café, and more. In 2012, Blanchet created Vickers Creek, a bluegrass band taking influence from legends such as Flatt & Scruggs. For the past four years, Blanchet has been conducting and arranging music for an all-French choir with Le Club Canadien Français de Thunder Bay. He is also presently an instructor at Lakehead University. He recently appeared on stage at Magnus Theatre for the outdoor production of A CLOSER WALK WITH PATSY CLINE in 2020.

Olivia Korkola is a petite powerhouse who will bring any crowd to its feet with her fiddle. She has performed in numerous shows throughout Canada and the United States and has shared the stage with many talented acts including Johnny Lee, Cherish Lee, Livingston Taylor, and Women of Ireland. A graduate of Berklee College of Music, Korkola was mentored by some of the world’s most renowned musicians including Matt Glaser, Darol Anger, and Livingston Taylor and is well-versed in many musical genres including country, jazz, bluegrass, Celtic, classical, rock, and others. Originally from Canada, Korkola is now based in Nashville, Tennessee where she works as a live performer, touring artist, and studio musician.

Dan Zadkovich is renowned in the local music scene. He holds a degree in music from Lakehead University, where he has been coaching and teaching at the Lakehead School of Music for over 20 years. He last appeared on stage at Magnus Theatre in the outdoor production of A CLOSER WALK WITH PATSY CLINE in 2020.